Bull of the Woods trails

I had yesterday off, and decided to do what I like to call an "epic" hike.  Essentially, it is a long hike that is rather challenging for me.  I invited my daughter to accompany me, and to my surprise, she said yes.

The route we took – Started at the north end of Ellk Lake Creek, went east at the Welcome Lakes trail until it intersected with the Geronimo trail, then to the Motherlode, back to Elk Lake and then back up to the starting point.  A big loop.  Depending on who you decide to believe, the trip was either 12.3 (the GPS) , 13.7 (the forest service mileage) or 14 miles (the GPS track).  Any way you look at it, it was a rather long day hike.

I was a little worried about the distance, coupled with the heat.  We got to the trailhead at about 9:15 and started off.  I've not been on the upper section of Elk Lake creek and it is beautiful, just as the rest of the trail is.  We got up to the climbing section of Welcome Lakes and I thought we were going to have to turn around because my daughter wasn't feeling well and had a headache.  A short stop with water and some food and she felt better and we continued on.  When we got to the lower (larger) Welcome Lake turnoff, we went down to the lake and hiked around the backside where you can actually see the lake. 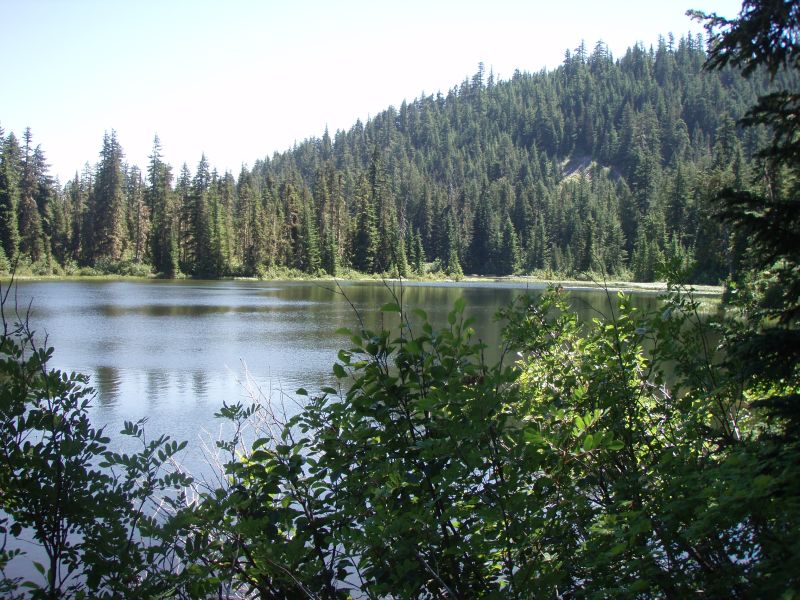 When we got to the campsite at Welcome lakes, there was a rather large encampment there.  I was surprised to see all the gear, but soon realized it was a group of people doing trail maintenance (saw lots of tools, etc). No one was in the the camp when we were there.  We assumed they were out doing trail work.  The good news is that you can see they have been busy.  We didn't have any downed logs on the official trails (Geronimo was another story), and many sections (but not all) of the trails that were brushed in were much more open.  There was a section on Elk Lake just past Battle Creek shelter last year where the vine maple had grown up so much you couldn't even see the trail.  They had completely cleared that area!  Lots of areas where you could see tread work as well.  They have obviously been busy and it shows.  There are still areas that are pretty brushed in, but hopefully they will be able to attack those before they leave for the summer.  We never did meet them on the trail, but if any of you are reading this, a BIG thank you to you guys!  Some of these trails were getting in pretty sad shape, and you've make a huge improvement to them!

The other big thing was the Geronimo trail. 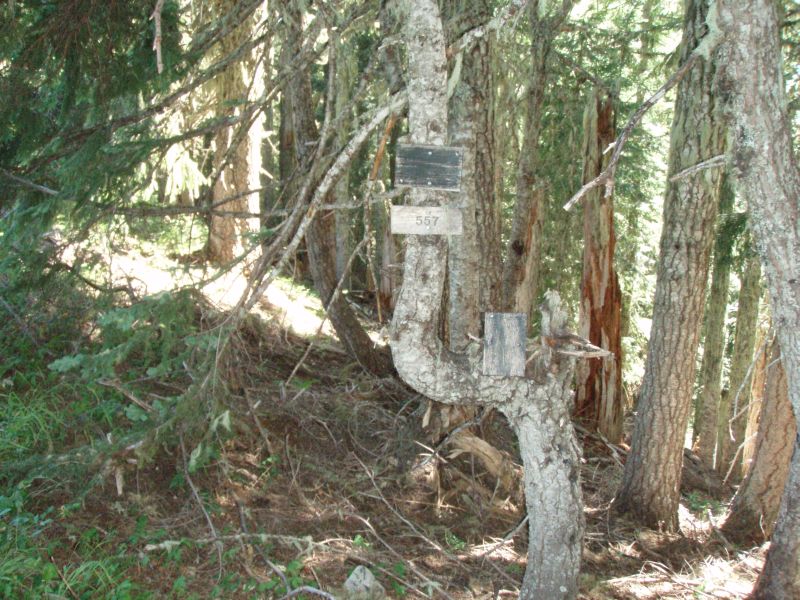 Quite honestly, based on the descriptions of the trail, I didn't think I would like it all.  I only wanted to say that I had hiked that trail.  I was actually very pleasantly surprised!  Although the trail itself is in rather rough shape (lots of downed trees, very brushy and difficult to follow in places), it is a really nice trail.  The comments about the trail make one think it is exceedingly steep, however I found most of the trail to be reasonable.  It was only the last 1/2-3/4 mile of the trail that was rather steep, and I've been on trails in other areas of the district that were easily that steep. (at least according to my rusty memory).  The trail starts out walking a ridge, then descends through a nice meadow where the trail is a little difficult to follow, but is very pretty.  It then descends down the hill at a reasonable grade until the last bit, which drops much quicker.  The trail does have little mini switchbacks to make it a little easier.  The biggest challenge on the trail is keeping on the trail.  There were several sections that required us to find the trail.  Downed trees, brush and general lack of use are allowing this trail to disappear in places.  It is pretty well blazed which helps a lot. 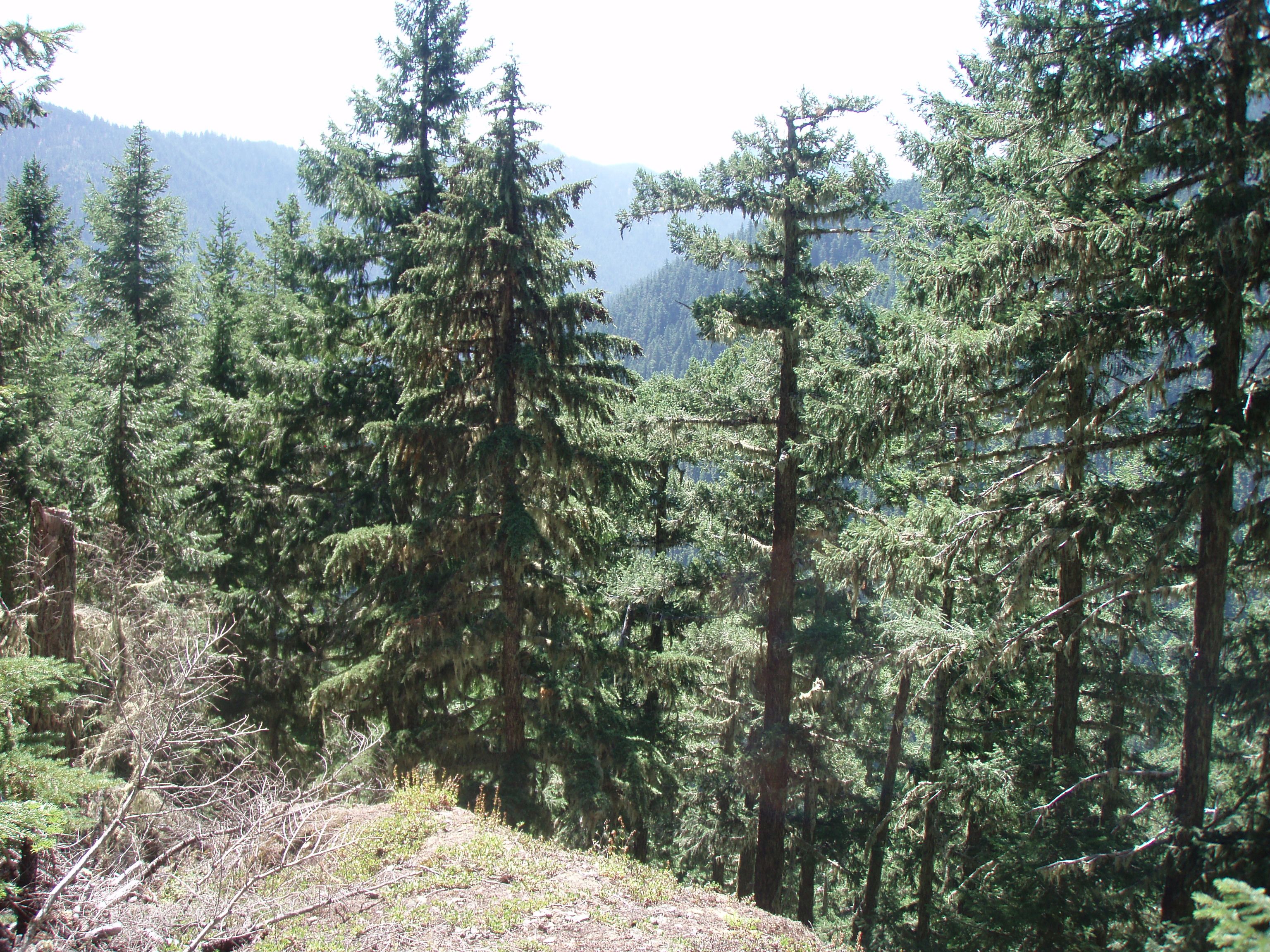 Once we got back down to Elk Lake trail, the two creek crossings were relatively easy, and the cold water felt good on tired feet.  We ended up getting back to the truck about 6:45, so it was about 9 1/2 hours of hiking!

If anyone is interested in doing a longer loop hike, I can highly recommend this one.  It was a GREAT day!  Thanks for reading my long posting….

One thing I forgot to mention – In the FS trail sheet, it references an abandoned trail juntion over to Janus Butte.  I marked it on my GPS, and it show the trail on my GPS map software.  Has anyone ever taken this trail?  The trail looked like it was blazed….You would have to cross Elk Lake Creek farther up which might be challenging, but it looks like an interesting trail. 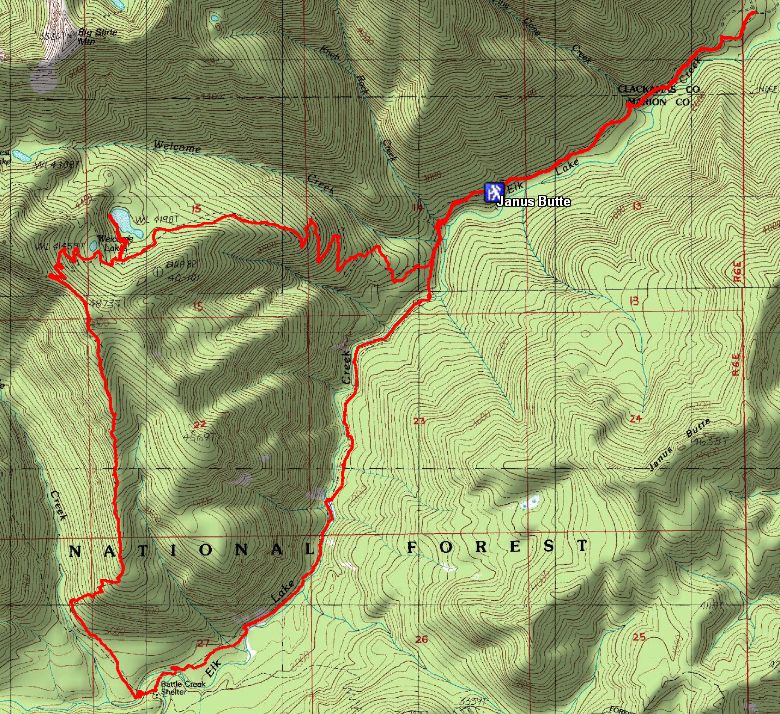 Sounds like Geronimo trail has an advocate! I have never been on it but thought it was a shame to take it off the system. Sounds like a little helpful flagging might be in order to guide the uninitiated.

There may be some archived posting about Janus but I don't think anyone has found much more than blazes on the other side of the creek. And I seem to recall something about needing to go up stream from the apparent location to cross.

Sounds like Geronimo trail has an advocate! I have never been on it but thought it was a shame to take it off the system. Sounds like a little helpful flagging might be in order to guide the uninitiated.

There may be some archived posting about Janus but I don't think anyone has found much more than blazes on the other side of the creek. And I seem to recall something about needing to go up stream from the apparent location to cross.

There were only a few spots where it got dicey.  The meadow up top was a little tough, and one spot where a tree had literally decimated the trail - it fell right down the middle of the trail were probably the two roughest spots.  Like I said, not too bad, but you had to pay attention and make sure you were following the trail, not a game trail.  I'm not sure what that trail would be like going up, but doing the loop we did was really pretty doable.  It did make a really nice loop - even though it was a little long.  If I was in better shape it would be easier.  I know 14 miles in a day is a piece of cake for some people.

I did some searching on the site and did find some references to that Janus Butte trail, but you are correct, no one appears to have gone past the creek.  Maybe a good fall project when the creek flow is lower...