Road 6340 blocked by down tree

I attempted to drive to the Dickey Creek trailhead today but found a large tree across the road about one mile from Road 63.  I've also seen a report that there's a tree across Road 63 just before the junction with Road 6350 (Graham Pass road).

I saw this post on the Oregon hikers forum today:

I checked the status of Road 6340 today and found that the log had been cut out wide enough for my pickup to get through. But about a mile beyond that a mudslide created another obstacle. It's not a huge mudslide but it's big enough to block the road.

This road leads to several trailheads: Dickey Creek, Pansy Lake and Bull of the Woods.

So it appears there are still access issues in that area.
Doug Firman
Member
Members

Here's a photo of the slide 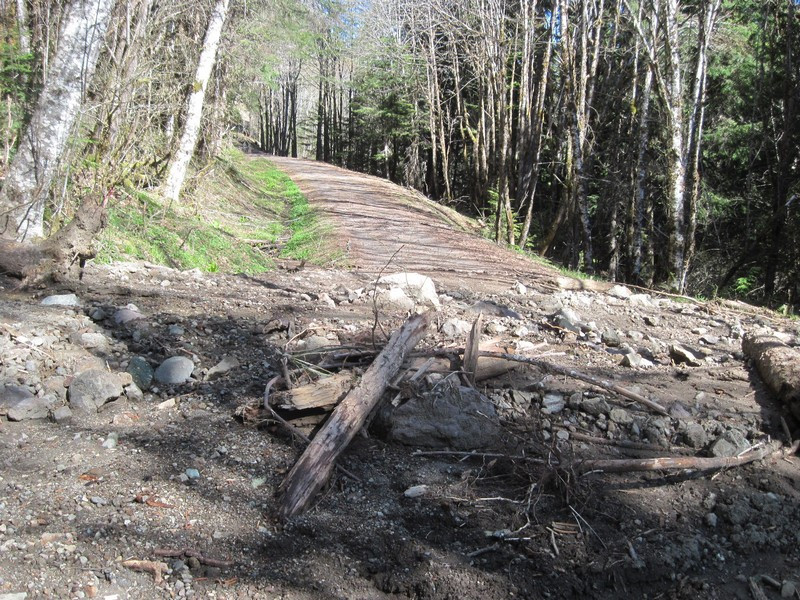 Doesn't look too bad, roll a log or rock or two and engage your 4 wheel drive and go! Thanks for the photo Doug, but as the FS continues it's exit strategy and does not clear or maintain the roads under their government mandate, see more of this coming down the pipe. Most clearing of roads in the forest today is done by woodcutters and explorers, the FS is usually the Johney-come-lately on the scene.

When I worked for the Oregon State Forestry in the late 70's on a fire crew  we daily cleared roads for the FS to get to the private land that was under our jurisdiction. Private holdings in the forest was a higher priority to the State Forestry than the FS even back then, just saying, even though they always had more resources from the US Gov.

I can't remember how many fires we responded to and later have the FS show up and takeover, almost wishing the fire would get bigger so they could soak up more overtime. I remember this one fire I had spent the night on and maintained it by a road and the morning the FS fire crew started a backfire that instantly jumped the road we had maintained all night. Here's your clue!

Don, I imagine someone will try to push their way through that with their 4WD.  The material is a bit deeper than the photo shows, and mushy too, but a big rig with good tires could probably do it.  As you say, no telling when the FS will get around to doing anything about it, unless they're planning some logging up the road.