We're wondering if anyone has a picture of one of the early Oregon Skyline Trail markers? Are there any on display in local museums? Do any exist in the field?
Thanks, Jerry & Nancy King

"After a peaceful snack, I began to work my way back toward the PCT, but I had not gone 100 yards before I glimpsed an unnaturally white shape on a distant tree trunk. Enameled metal, with the original tasteful logo of the Oregon Skyline Trail, and not shot full of bullet holes, it was a treasure indeed. 50 years back into History my mind leapt….the 1930's, so long gone, the trail builders rerouting the original Skyline Trail from the lowlands route of the early 20's, high up to the spine of the Cascade Crest. It was probably the CCC men, grubbing and marking this trail lovingly. How many years had gone by since their work was bypassed by the modern PCT? And how many quiet years had it been since human footsteps had trod this trail? And how many more years would this unmaintained and forgotten gem exist before Time took it back, and it became so dim that it would be lost to history, forever?"

Let us know what you discover.

Seems like I may have seen one in California on the John Muir Trail.

The ones we are looking for Say OREGON Skyline Trail, not in California

Here's a link to September 23, 1937 newspaper article about signage on the Skyline/PCT:

I found a photo online from a book that has a picture with a Skyline Trail marker in it. I'll try to link it here:

Rob, that's the name I was trying to remember. He wrote the notes promoting the relocations of the Skyline. I believe he was retired but still consulted and respected.

Thanks for the link to the book about the Three Sisters. This still isn't the sign we are looking for. The sign I remember seeing in the 1960s and 70s (probably installed in 1937ish, per Bend Bulletin article) was metal, enameled and I believe was green on white. They were found frequently along the trail. It was similar to the Pacific Crest Trail diamond metal tags used in the 1970s and 80s.

I asked/looked at the Government Camp museum and the Clackamas Lake RS museum, but came up empty-handed.

Were you able to get any information from Bruce Johnson?  What part of the trail do you remember seeing the old markers on?

You said you remembered the markers being like the metal diamonds, were they the smaller size or were they a little bit bigger, like the size of the green and white PCT markers with the tree on them?

Good luck in your quest!

Like I said, John Muir Trail. I believe they were all the same sign. Green and white enamel diamonds. When we walked the PCT in '74 they were all along the trail portions of the trail. they were old then. Often folded in half as the trees grew. Meaning, at that time, there were many missing townships of trail.

There was another style of enamel sign in the District. Distinctive in their use of what I believe is called "bankers script" or type.

The specific Skyline signs I have seen in the warehouse and other places were wood.

They say a picture is worth a thousand words. So here's a picture: 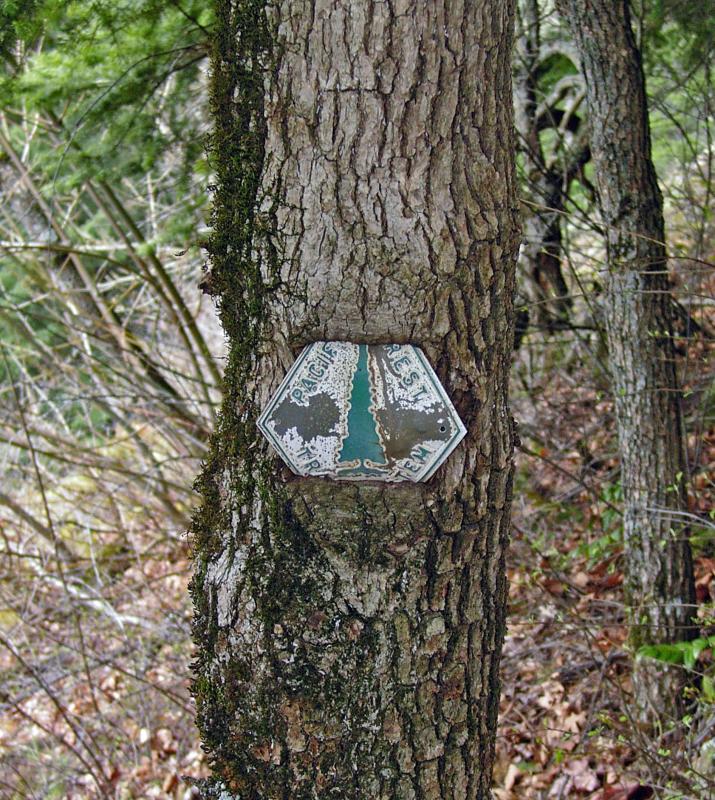 Is this similar to the Skyline Trail markers of yore? 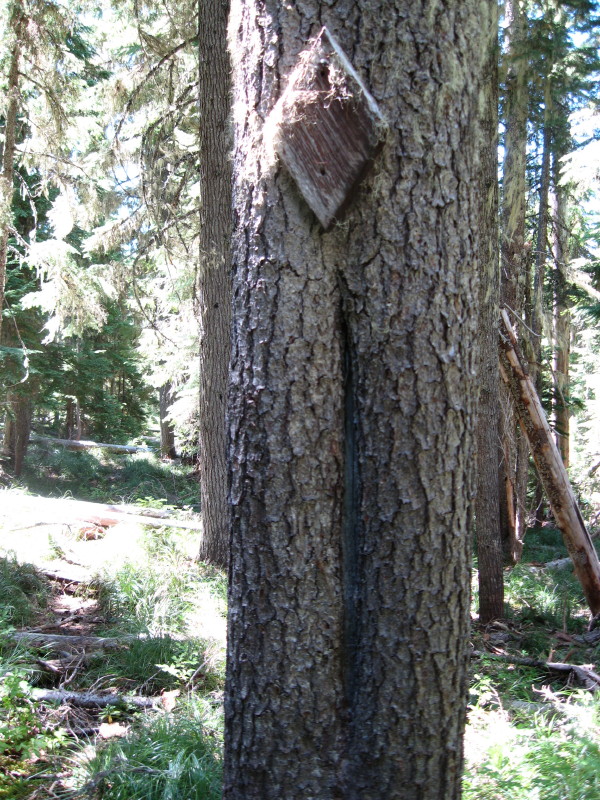 Most of the time what I have seen on the Skyline Trail look like this photo with the wood diamond with the sign missing.