Rather than hijack the snow level thread, I thought I'd move over here...

Robert Koscik said
I have spent a lot of time on that trail over the years, until the Forest Service trenched Twin Springs Campground (WHY?!!?!!!). Each year I made it down a little further and cleared a bit more.

A couple of years ago, Don and I made it to about 1/2 mile or less to the river. We brushed out and flagged a good portion of the route, although it is very steep and vague. It was never built as a first-class route, and every time I hike it I swear to never do it again "LET IT DIE!", my legs scream. IMO it's one of the worst trails in the district, straight up the mountain for 2 miles, with little tread.

It isn't terribly difficult to follow, but gets into younger growth towards the bottom and hits a very brushy flat. There are a couple of cut out logs, and you should be able to see prodigious loppering on rhodies. The Roaring River canyon is insanely brushy however - a real jungle, so give yourself extra time to tackle that stuff. It varies from fire scarred younger growth to big tangled old growth. Lots of water down there too, streams, marshes, bogs...but nothing you haven't seen before though on your crazy adventures.

Thank you for your efforts and the preview! Well, you just about talked me out of it, I can't stand thick rhododendron so I'm going to pencil this one in for Saturday - maybe I won't do the upriver part. What got me interested was the description and track provided in the trail index and the following snippet from a 1952 Oregonian article describing the trail. 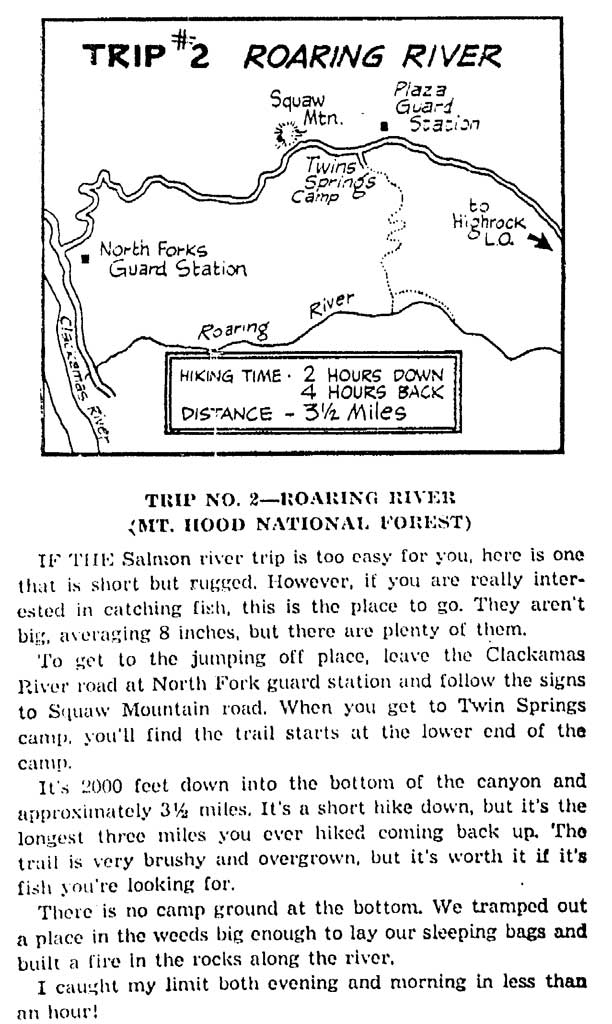 That is a very cool article from the Oregonian, Paul!  Great find!  I've poked around a bit in their archives, but have not had a lot of luck finding things.  Any hints you've found that worked well?

Rob Williams said
That is a very cool article from the Oregonian, Paul!  Great find!  I've poked around a bit in their archives, but have not had a lot of luck finding things.  Any hints you've found that worked well?

Hey Rob, just be patient and lucky. There's so much stuff, I don't recall how I landed on this particular article, probably searching for 'Roaring River'.

So, inquiring minds want to know if you ended up doing this hike or not?

Rob Williams said
So, inquiring minds want to know if you ended up doing this hike or not?

Yes, I did, today rather than Saturday. The trail is well flagged and fairly easy to follow as far as the GPS track you've provided goes (thank you Trail Advocates). On the way down I stepped off the flagged trail a couple of times but got right back on track - on the way back up I did not have any problems staying on the flagged trail. Beyond the end of the GPS track I stayed on the east side of Plaza Creek. I sure wish the author of the Oregonian article had drawn in Plaza Creek so I'd know for sure where the trail went. The 1946 map has the trail entirely on the west side of Plaza Creek which is obviously wrong - the 1963 map looks more like what is there and it has the trail down to the river on the east side. I figured the east side and I was not disappointed in choosing this route - that said, I can't honestly say I found trail although it sure seemed like it - I did not see blaze nor maintenance to support a claim for a trail. I did not find the brush to be particularly bad in fact it was easy traveling down to the river. I'd hoped to find a fire ring or other evidence of human presence, but nothing showed up and I did not stick around. I just did the out and back - the up (or down) river part will have to wait for another outing. The climb out was short but brutal. A lot of fun.

I'll post a map and the GPS track shortly...

Part of what I traveled on the east side. Hard to tell if it is trail or not. 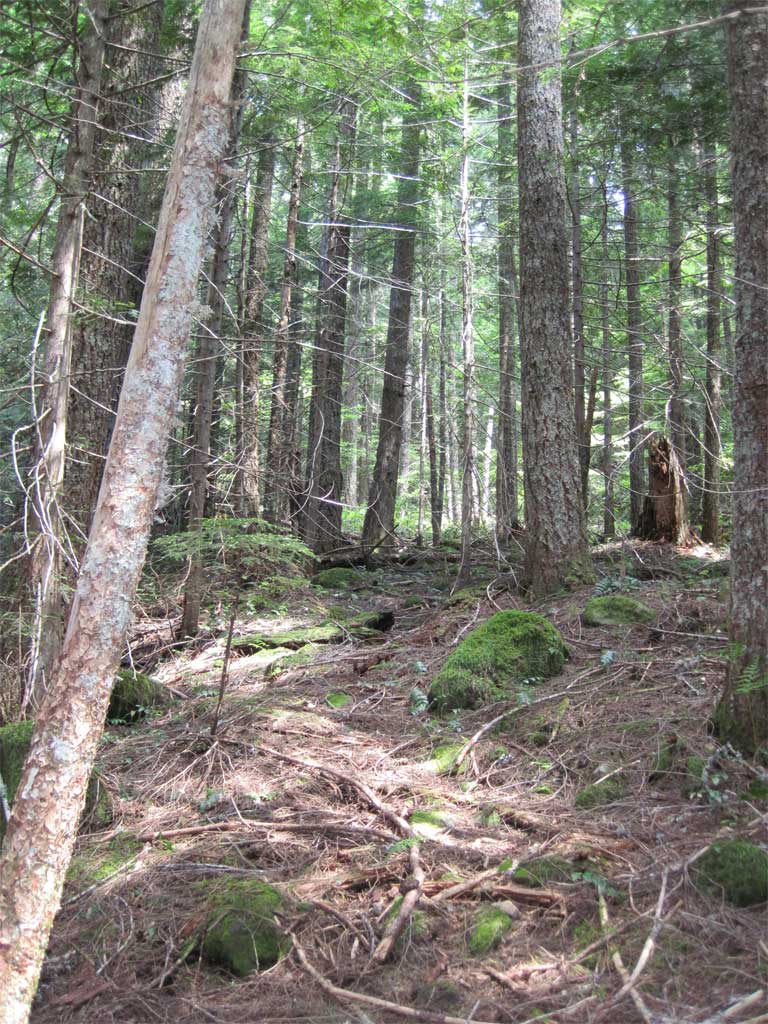 A pretty meadow in the flat. 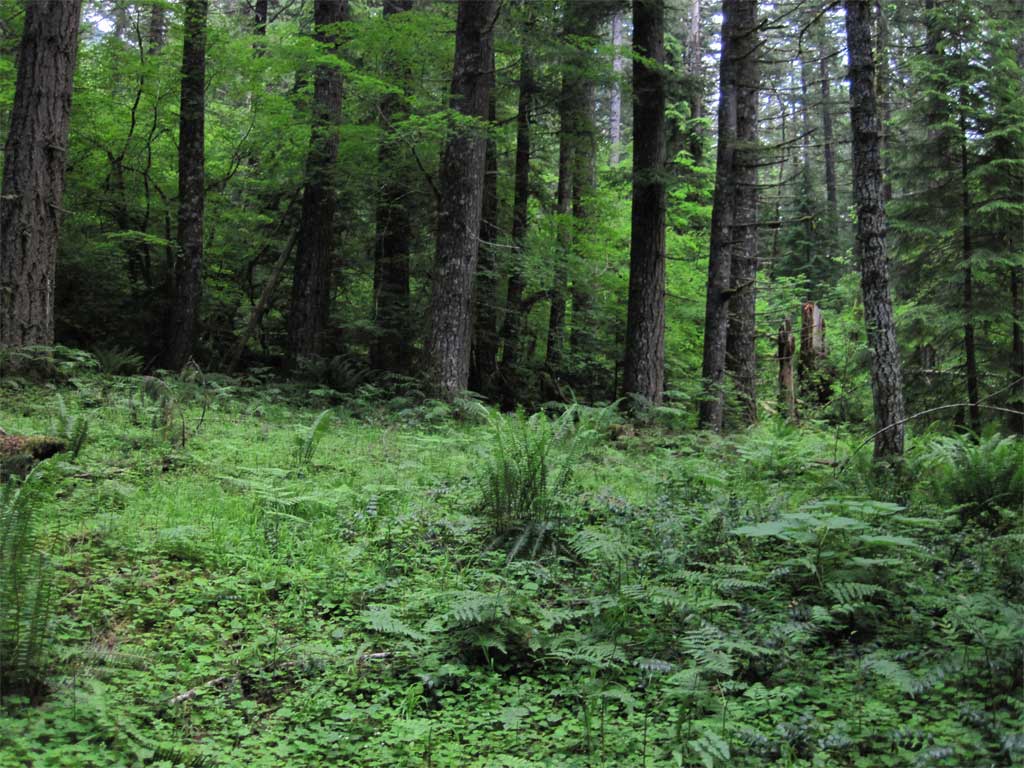 There is some brush in spots but no dense rhododendron thickets 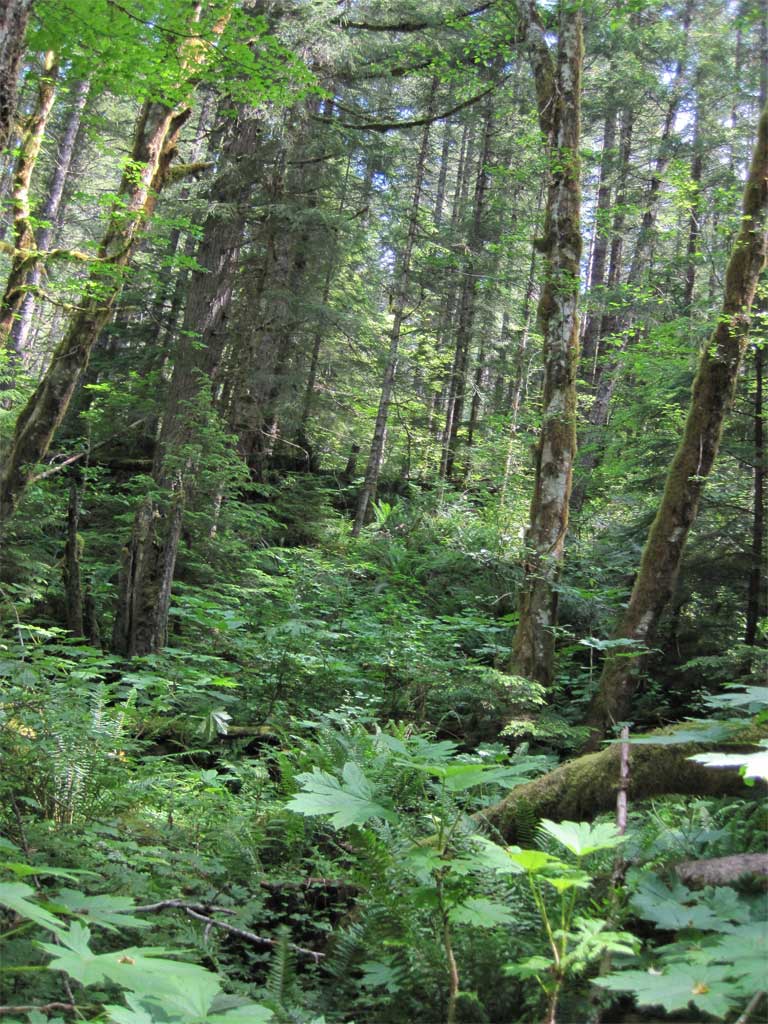 Down to the Roaring River 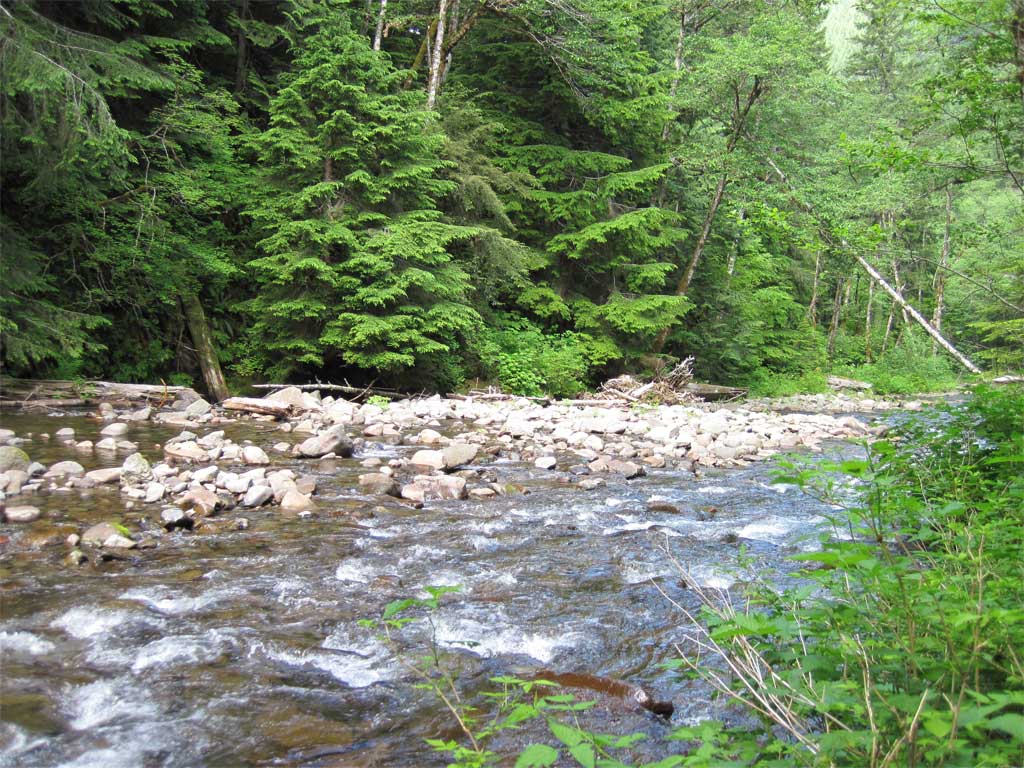 My new ride, I parked next door to the Old Baldy TH. 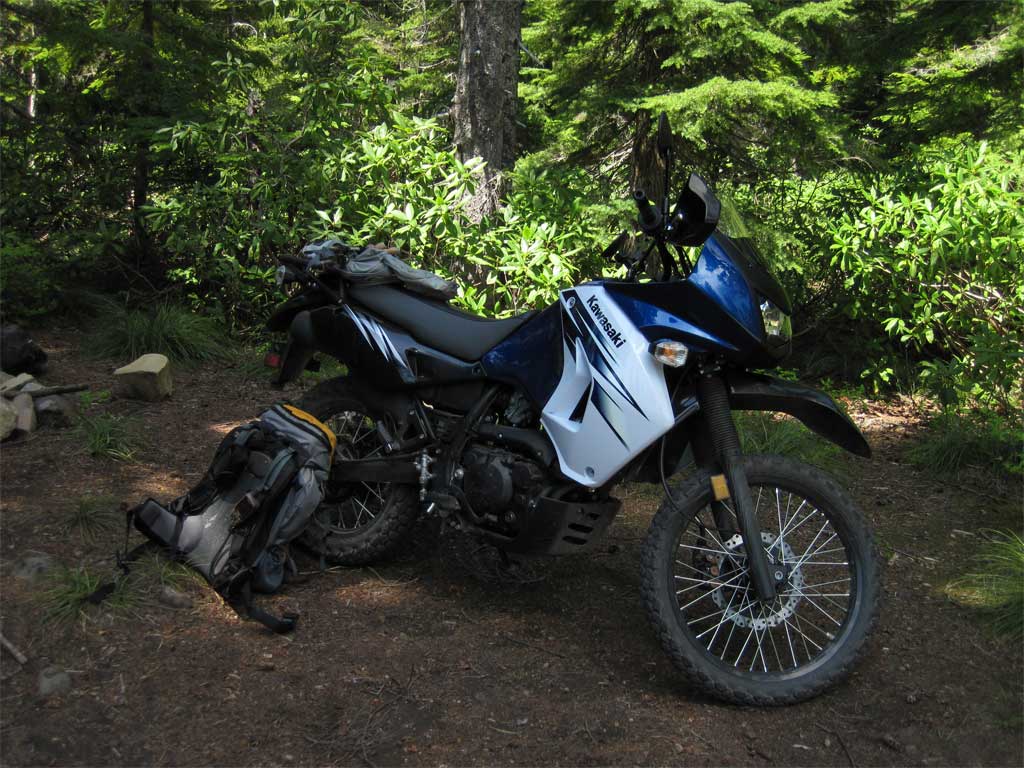 I'll post a map and the GPS track shortly...

As advertised, not able to upload the GPX file. 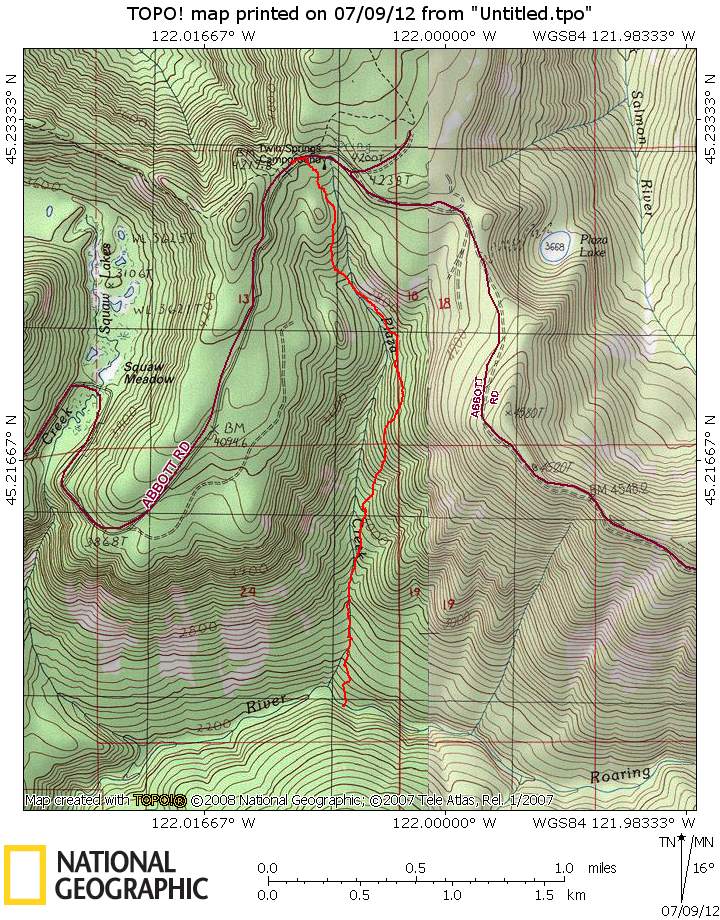 It's fun, Abbott Road is a great place to take the 'new' off anything.