Decided to try and hike the south half of the Baty Butte Trail.  Ran into an unexpected problem - road 7010 is closed about 2 miles up due to a washout!  No signs until you get to the closed area, and no notice that I could find on the FS website.  Looks like they are replacing a culvert due to a washout on the creek right before Blister creek.

We took a look at the maps to see if there was an alternate way to get to the trailhead and it looked like the only alternative was to come in from the Molalla side, which would have been a LOT of driving.  So, we decided to do some cross country travel - it turned out to be a LOT tougher than we thought, but we made it to the trail.  Since it took us so long to do the cross country route, we didn't have a lot of time to hike the trail, but we did get to the first meadow on the trail.  We hit a few serious patches of snow on the trail ( 3-4' deep), but they were pretty isolated and we could still find the trail OK.

It was a great, but very tiring day.  Battling lots of vine maple, devils club and rhodies a lot of the way, as well as gaining quite a bit of altitude.  That area is pretty steep....The trip over was so bad, we decided to walk the road back, which was quite a trip, but was much faster than doing the cross country thing again.

The trail itself is in reasonably good condition, but a little worse than I remember it last time (2009 I think).  Some sections are pretty brushy, and there was a dozen or so trees down on the trail, all of them essentially stepovers.  This trail really needs some friends, and more boots on the trail.  It is a WONDERFUL trail - great views, a nice breeze, and well graded.  If you haven't hiked it I would highly recommend it.  You won't be sorry.

Would it be feasible to hike this from Thunder Mountain / Skookum Lake? How far is the trail from Skookum?

Would it be feasible to hike this from Thunder Mountain / Skookum Lake?

Yes, it shouldn't be a problem to hike WSW from Skookum to the south part of the Baty Butte trail.

How far is the trail from Skookum?

About 4 miles. We were going to start at the trail on the 160 spur of road 7010 and go south, but that washed out section of road stopped us.

I'm going to remember this as the blood, sweat and tears hike. Blood: from all the scratches on my legs, sweat: from going up 1,200 feet in about 2,100 feet (if I did my math right, that's a 55% grade), tears: from my 12 year old son who fell a couple of times on that 55% slope (actually the tears never spilled, but they were almost there). He was a super trooper, and I think he really liked most of the trail once we got to it. He didn't really appreciate the trail through the sidehill meadow. He's a little bit leery of steep places. I don't think he could of gone down the way we came up. I not sure I could have gone back down that way either. Did I mention it was steep?

If anybody wants a good workout, I highly recommend the route we took. I also recommend taking your kids with you too. That way you can go at a slower pace up the steep parts. Unless your kids are faster than you, then you might have a heart attack trying to keep up with them.

OK, I promised some photos, so here we go.  First, a picture of the washout on the 7010 road – I think they have removed the culvert, as it looked like there had been some excavator work: 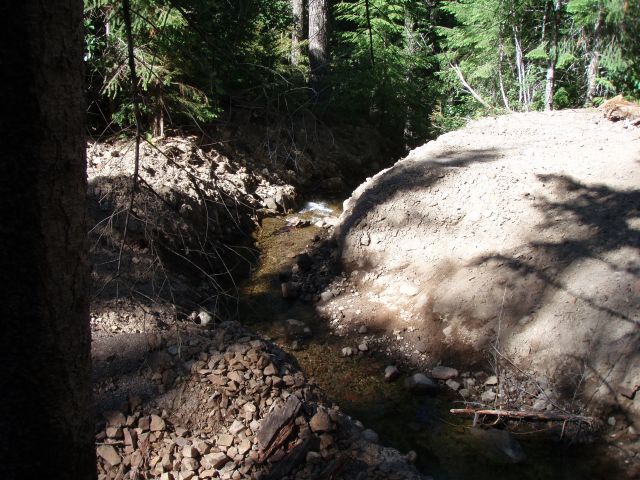 Next is the view from the first viewpoint on the south end of the Baty Butte trail (looking at Mt Hood, Thunder Mountain and Mt Jefferson):

And lastly, the first hillside meadow with the wildflowers.  This picture doesn't do it justice at all.  By the time we got there it was late afternoon and the lighting doesn't capture all the flowers and color: 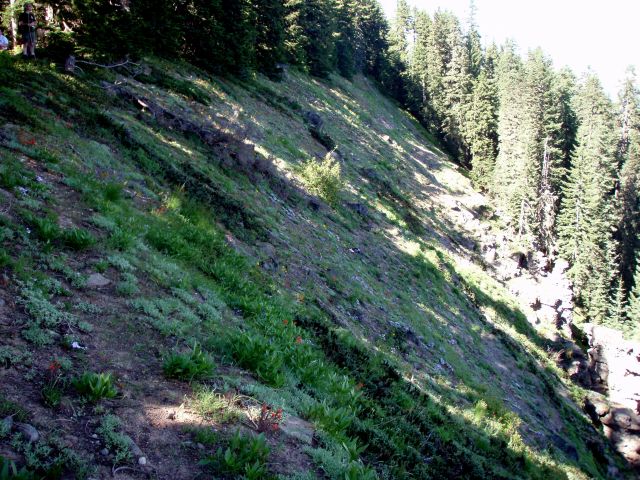 And yes, the cross country section was STEEP.

I was a bit disappointed we didn't see that big tree, but we certainly saw a LOT of very large trees up that drainage.  They are all over the place!  What a great place to explore an old growth forest!

I just wish we had some notice that 7010 was closed - I found no notice on the FS website, and there was no warning the road was closed until you got to the washout.  Usually there is a sign at the turnoff - "Road closed 2 miles ahead" or something like that.