Just in case anyone might be thinking of going into the Bull of the Woods Wilderness, the FS expanded the fire closure area today.   The closure order and map are here:  http://www.fs.fed.us/r6/mthood.....hmentA.pdf

Looking at the maps as they update them, this fire continues to spread, although very slowly....The look of the BOTW is going to change.  Doesn't look like the trails will be opening anytime soon.  They are basically just monitoring the fire, letting it burn.  The area around Schreiner Peak is almost completely consumed now.  Looks like it is nearing Elk Lake Creek, too.  I'm glad I got to experience the trails before they change significantly!

Update on Bull of the Woods closures (from the USFS website):

A Large Portion of the Bull of the Woods Wilderness and Adjacent Area of the Clackamas River Ranger District Remains Closed.

Trails #729 and #732 remain closed due to hazards posed by burned-out snags.

New Closure Order and Map for the Bull of the Woods trails:

Interesting notes from the closure orders:

For the Olallie Trails:
"These trails shall remain closed until May 15, 2011"

Those wishing at least a view of the BOTW burn should head for the lookout. I'll be going there soon!

With the (possibly) last of the nice weather upon us, I took Wednesday off to do what is probably my last high elevation hike of the season.  I went up to Bull of the Woods lookout on the #550 trail.  I was very surprised at the lack of snow, especially since it must have gotten dumped on a few weeks ago.  The only snow I saw was on north facing slopes or shady areas, and even there, it was only a couple of inches deep.

The trail was in great shape, with only a couple of downed logs.  There are a few areas they get rather brushy, but since all the undergrowth had died, and all the huckleberry bushes had lost their leaves, it was still easy.  I spent some time brushing the worst of the trail, up top, but it still needs a lot more work.

One of my goals was to see how much damage had been caused by the fires this summer.  I was rather disappointed that I couldn't see much.  From what I could see, it looks like the damage is less than I was fearing.  Big Slide Lake looks untouched, but I'm not sure why the Dickey Creek Trail is closed.  I didn't see anything back that way that looked burned, but it must be beyond what I could see.  Here is a pano of Big Slide Mountain looking east from the lookout:

It was a beautiful day, and the wind going up the Clackamas gorge was as strong as I've seen it - the reservoir had BIG whitecaps on it!  I didn't have a whole lot of wind on the trail, just a little once I got up to the top.  One thing: The lookout appears to have lost part of one of its shutters.  I think it was sitting down on the ground below it.  It looked like someone had weighted it down with rocks, I'm guessing to help keep it from blowing away. 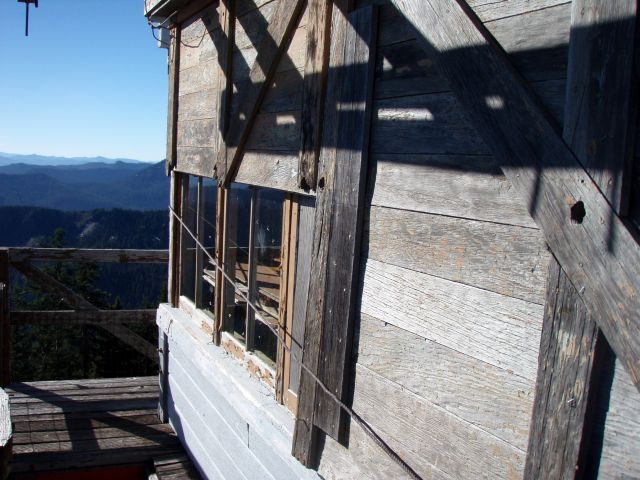 A great day, and a wonderful way to end the high country season.  After this weekend, I think it will be low elevation trails for a while....

Thank you Rob. I enjoy the look around.

That poor tower never seems to get the attention promised. I hate to say it, but there may be a willful inertia of delay involved. Complicated by difficult zoning.

Maybe we need to get the Scouts on it. At least repair the shutters.

Might step on some toes, but who cares if the toes are inactive?

Kinda like when we painted Hawk Mtn the wrong color. It said Hawk Mtn on the can but it turned out not to be what some one figured would have been if it could have been. But hey, any paint is better than no paint.

Anything positive at the tower would be better than nothing.

Well, the only sign of "work" was a new aluminum ladder under the lookout-At least I don't remember seeing it before.  We can hope that maybe next year will bring some TLC to the lookout.  The existing paint is even wearing off it has gotten so bad….

I've posted a few photos of the fire damage on my Flickr page at http://www.flickr.com/photos/1.....283420/.  The views from the lookout tower are of course the same that Rob posted, but I also have some views from a vantage point on the south side of Elk Lake Creek that might be of interest.  It took some serious bushwhacking through the rhodies on the hillside south of the creek to find a place with a decent view, but I got a better perspective of the extent of the fire damage, so it was worth it.

Thanks for posting the photos, Doug.  From all I've seen so far, it isn't as bad as I thought it was going to be, but then again, you can't really see the whole Welcome Lakes area.  It was a pretty extensive burn, but it could have been a LOT worse.

Someone on Portlandhikers actually hiked the Dickey Creek trail last weekend (didn't know it was closed-said there was no obvious postings), and it didn't have ANY fire damage on it at all. I'm just curious why that trail is still closed?

Too lazy to take down the signs...