Well, today couldn't have been a better day!  I wanted to take advantage of the nice weather for what may end up being my last outing this year.  After asking some questions here, and some info from the new caretaker at Olallie Lake, I decided to try my luck and see how far I got.  I wasn't quite sure what I was going to find, since it looked like there might be a fair amount of snow.  The plan was to Hike the east end of the Red Lake trail, hike up to Timber Lake, then head up Red Lake to Potato Butte and then back down to Double Peaks and then back to where I started.

I couldn't believe the conditions.  On the way in, I started seeing a little bit of snow at 4200'.  I figured I wouldn't be able to get up to Double Peaks (almost 6000').  On the trails, there was VERY little snow on most of the trip. It was an absolutely GORGEOUS day.

To summarize the trip in a few words – Rocky, wet, chilly and totally cool.  The trails were in good shape (thank you volunteers!), but due to all the snowmelt, the trails were under a lot of water.  As many of these trails go through wet areas, the trail gets swallowed up, so it took some attention to watching the trail in order to keep following it.  It was a rather chilly in the morning, and in the shade on some of the trails.

When I got up to Double Peaks, there was a bit of snow on the trail, but not too much.  I was able to stay on the trail all the way to to the top.  The trail sheet says the trail is steep, and BOY were they not kidding!  It basically walks up the side of the hill.  With the snow, it make it double difficult.  But, I made it and the view is astounding.  Mt Jefferson is right in front of you and you get a 360 degree view.  I could have stayed up there for a while, but I was already past my time, so I will be coming back in the summer sometime.

One of my favorite pictures from today (on top of Potato Butte): 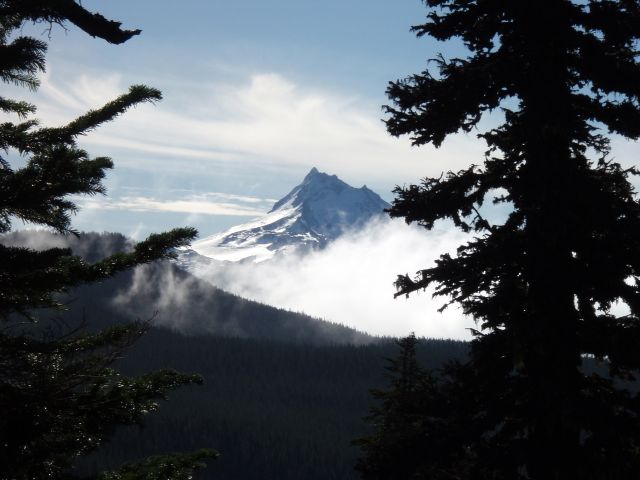 Thanks for the report.

What is the status of the resort at Olallie? I think it has been closed for a ccouple years. Will it reopen?

When we were clearing trails around the lake this summer they were remodeling the cabins, for it has come under new management. I believe they plan on opening next summer, but their website will probably give you the info that you want:

All I can tell you is that the cabins looked like they had significant  work done to them, however the road to the store and cabins was blocked by several large boulders, so I couldn't go too far to investigate.  I'm guessing they put those there for the winter to keep the yahoos out.  I do believe the plan is to open for business next year, though.

Thanks for the info. That website is not the same as the old site, so there must be new operators.

I'd be surprised if they could block the road off and deny access to the trails and campgrounds that are up there in addition to the resort.

Thanks for the info. That website is not the same as the old site, so there must be new operators.

I'd be surprised if they could block the road off and deny access to the trails and campgrounds that are up there in addition to the resort.

It was just the road that went to the store and Paul Dennis campground, etc.  When you come to the lake, it is the left fork at the guard station that was blocked.  I'm not sure if there is another way up that side or not.  I'm not really too familiar with Olallie Lake.  I've only been there 3 times.  My guess is that the block is only for the winter and will be removed when it opens in the spring.