Where are we?
Donald Presley
Member
Members

I know it has been a while for me to post, but where are we? Do we not post anything nowadays? Winter has always been a slow time for most hikers unless you ski /snowshoe or snowmobile. I have done all those activities at different stages in my life, but hiking has always been more dominant. I look forward to the adventures I will pursue this year and look forward to your postings also.

I took the opportunity on President's day to hike up Cripple Creek to the 4635-120 crossing.  I should have brought my snowshoes.  It was tough going, especially in the thinner and open areas.  The road had over 2 feet of snow on it.  Trail was pretty much covered the entire way, except for a few bare spots down low.

Here is the hillside meadow - on the trail was close to a foot of snow, but the upper hillside was bare:

And here is my dog sitting in the deep powder on the 4635-120 spur.  This is where we turned around.

It was a beautiful day - a couple of times there were nice sunbreaks thru the trees.

Yesterday I wanted to go somewhere with less snow than what Rob ran into, so I went to the Riverside trail.  There was several inches of snow on the trail as well as many spots where the ground was bare (and muddy).

Along the way, near Austin Meadow, I noticed something across the river that looked like a trail on the hillside (see photo).  I was intrigued by this and studied it with my binoculars.  If it was a trail, I could not see where it might have come down to the river or where it might have switchbacked down from higher up.  It's probably just a naturally-formed bench that the snow highlighted making it look trail-like.  My mapping program shows the proposed "urban trail" route nearby, but that trail was never built.  (It is non-existent, isn't it?).   I know that the Cold Springs trail came down to the river at the fish hatchery but that was farther upstream, near Tar Creek as I understand it. 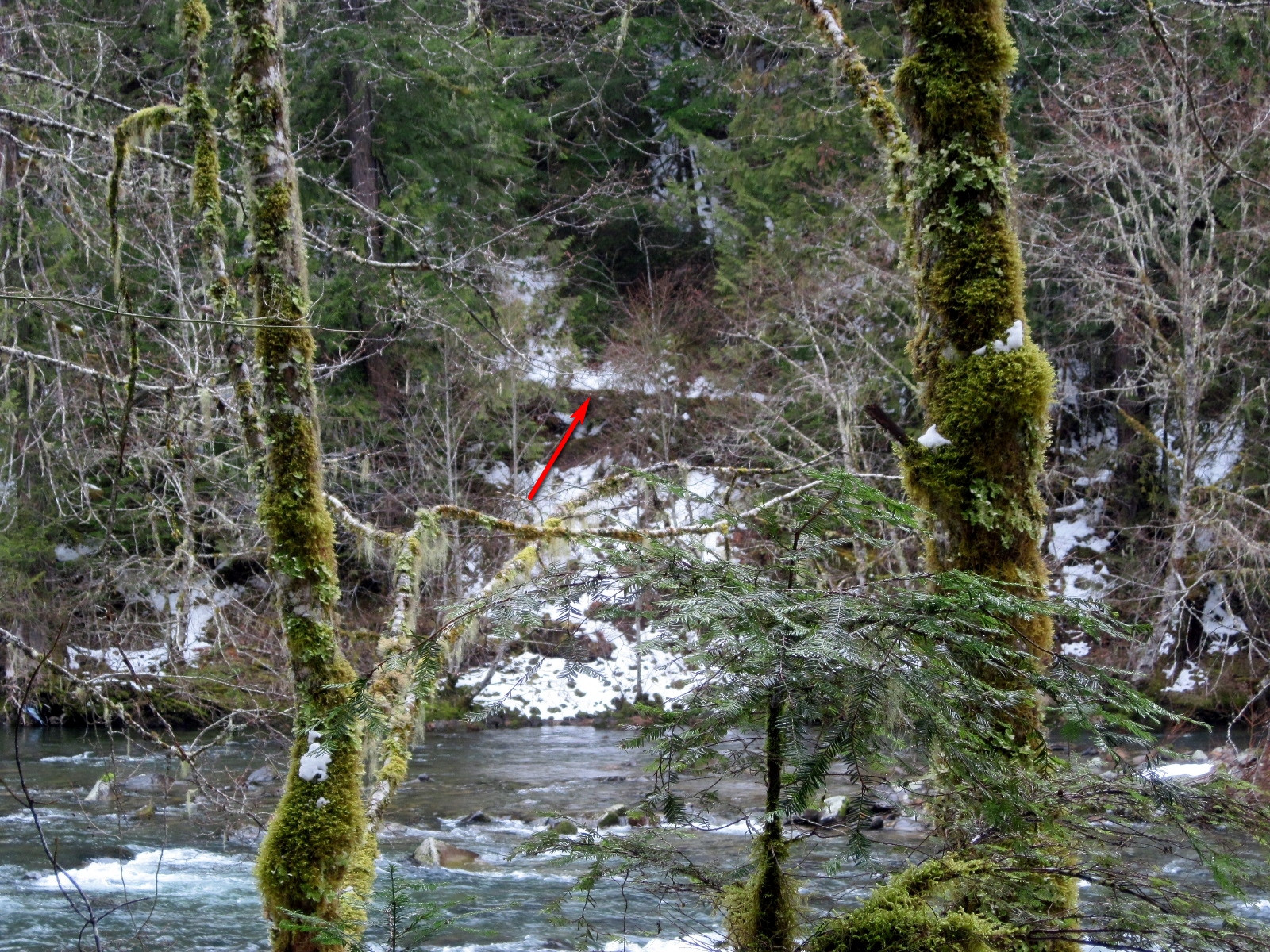 I went as far as the roadside campsite, about 3.5 miles, then turned around.  The photo below was taken on the river below that campsite (elev approx 1500 ft). 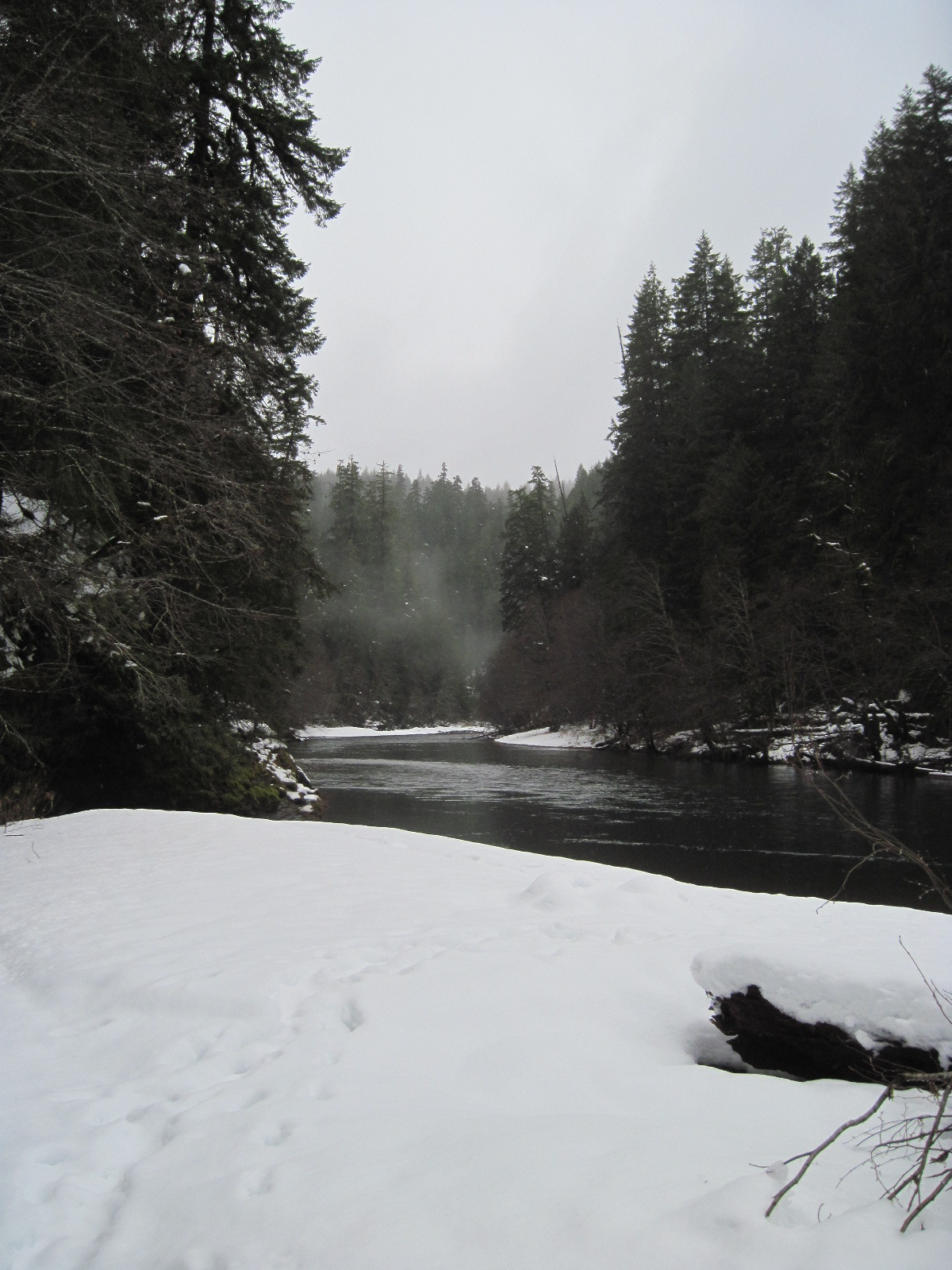 On the map, the yellow diamond marks the spot from which I saw the "trail" on the other side of the river, in case anyone wants to wade across and see what's there. 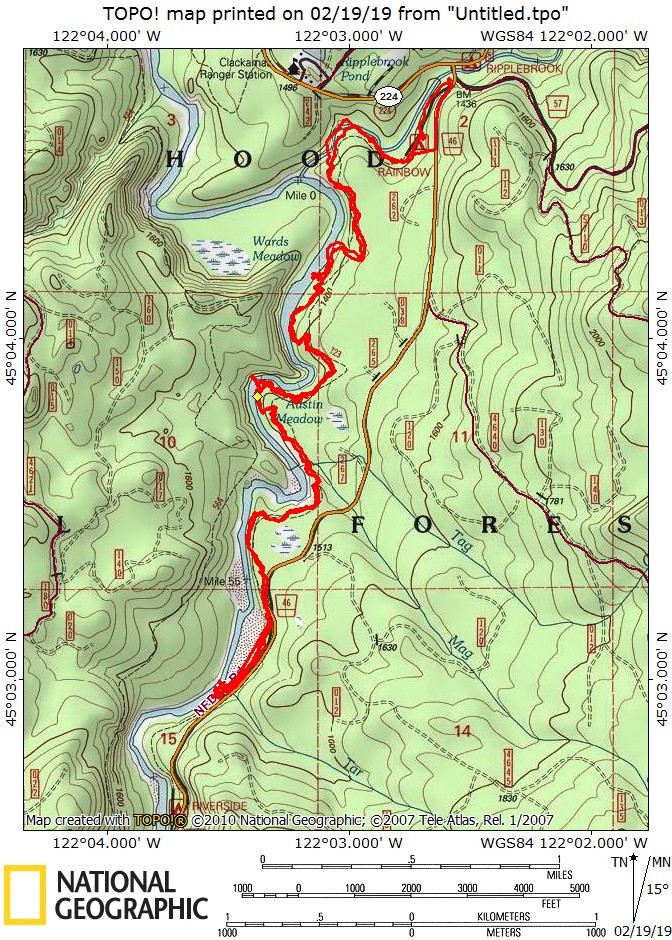 That is one thing about the snow - it really makes the benches stand out like that.  Great find!

I can't imagine that is any segment of the Cold Spring trail - it shows it coming down to the fish hatchery which seems like a pretty big landmark to mess up.  I've not seen any other trails (except for the non existent 564 trail) on any maps I've seen.

It looks like you could get over there from one of the spur roads off 4621.  Sounds like an interesting winter time exploration...

It might be easier to wait until September and just wade across the river.  There's probably nothing there, but on the other hand I know there are trails which don't show up on the maps.  Might be worth a look.

I concur with Doug Firman that where the Cold Springs Trail comes across the Clackamas River is more important. There were or are several structures on the other side of the river in that area that need to be looked at, but as Doug said it will probably be easier to cross the river than trying to drive there after all the decommission of roads. So a late summer swim might be involved?