Yesterday I did some exploring on Collawash Mountain to see if I could find either of these two trails shown on the 1938 map.  The blue trail is the Rho Ridge trail and the yellow trail I call the Collawash Mtn trail. 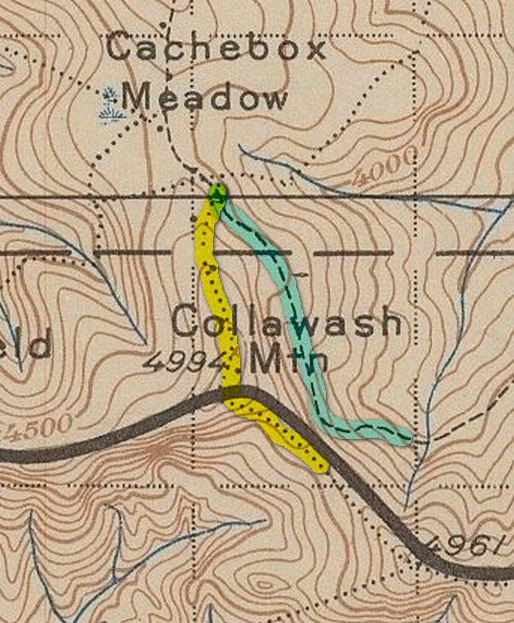 I found segments of both of them.  The yellow trail, the Collawash Mtn trail, runs along the east side of the ridge leading up to the summit.  I was able to follow it for about 1/4 mile to the edge of the clearing on the north end of the summit ridge.  At that point there is some bunched phone wire on the ground and an insulator on a tree.  Beyond that point there is a long rock field along the west side of the ridge with no clear evidence of trail.  The map suggests that the phone line went farther south along the summit ridge and that the trail continued beyond the summit to the south.  I followed that route along the east edge of the ridge as far as the road which runs along the Willamette NF boundary, but found no sign of trail. 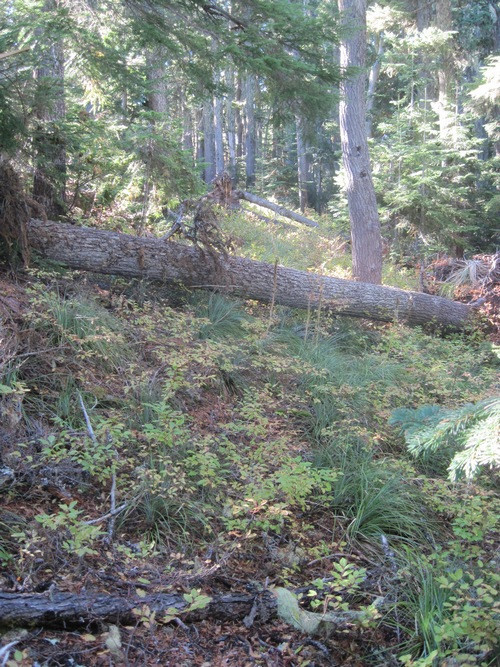 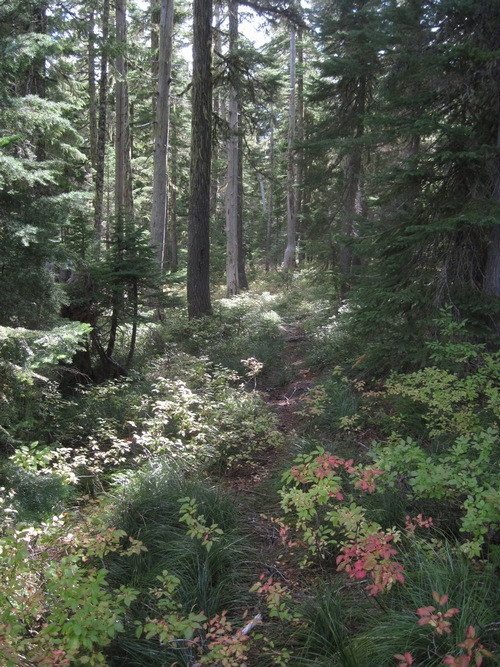 Photo of the general area and gps track of my route: 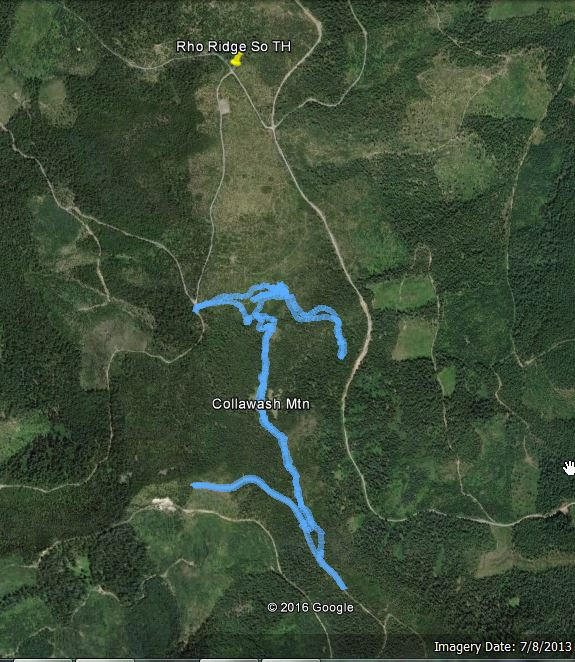 The map below shows my route with the located trail segments highlighted: 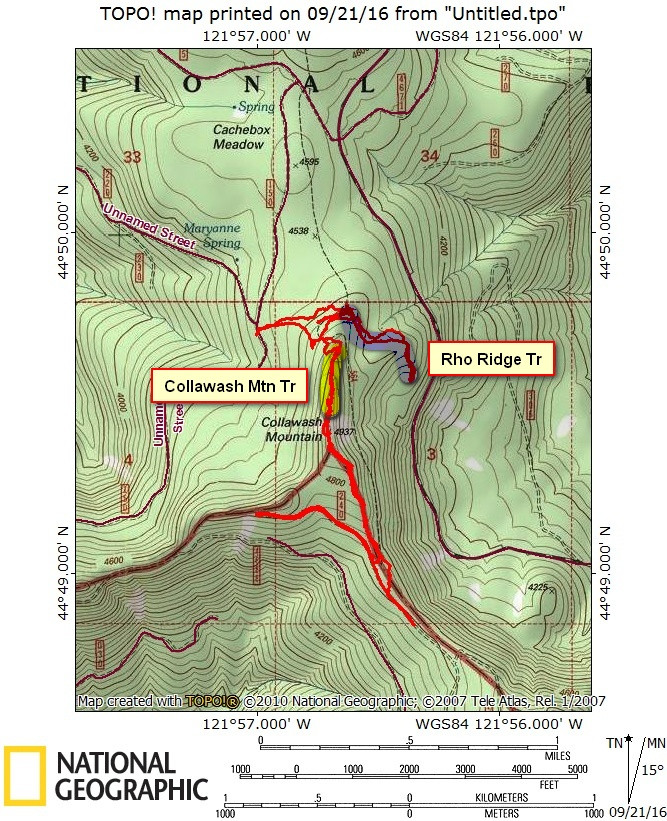 View west across the summit of Collawash Mtn: 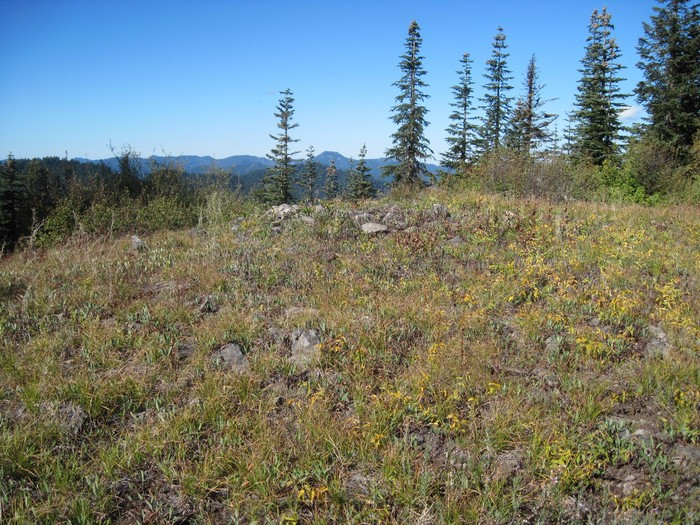 Thanks for posting this, Doug!  It is very timely for me.  I had been looking at old lookout panoramas and saw the Collawash Mountain one and thought "I think someone had looked for that trail down there - maybe I should go take a look".  Now I know something is there - it looks like the view from Collawash Mountain is still pretty good.

Maybe I can try and get up there before the snow flies this year yet....

Rob, the views are excellent, both to the east and west. It's well worth the trip up there. Paul Turner posted a trip report a few years ago with some very good photos https://www.trailadvocate.org/sf-forum/trail-reports/south-rho-ridge-rapidan-to-collawash-mtn/

Do you have any info about what kind of lookout setup there might have been on Collawash?  I did not see any sign of a lookout structure.  The panorama photos look like they might have been taken from the north end of the summit ridge, close to the insulator and phone line that I saw.  The tree with the insulator had several wires coming out of it in different places, making me wonder if it was the end of the phone line.  Maybe there was a phone box there. 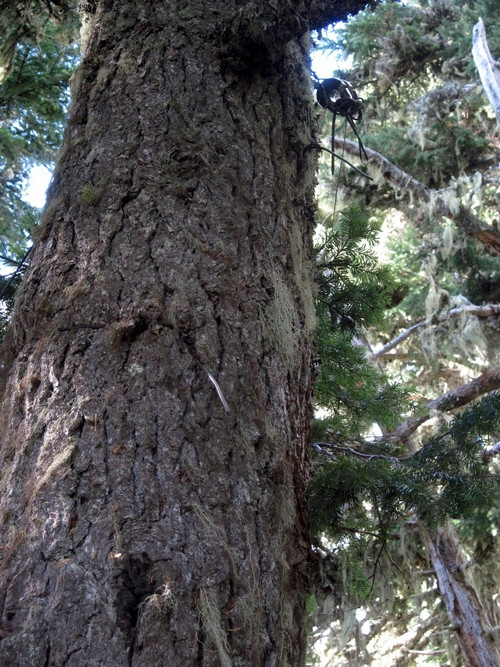 I don't have any info on what kind of lookout was there.  The only info I have is the panorama photos, which it sounds like you've already looked at.  I'm always amazed at how different most of those locations look today - when the photos were taken they had cut down a lot of trees around the lookout and in some places it was barren due to fires.

I did a little looking at a few sites and there doesnt' appear to be any info on a lookout structure on Collawash Mtn.  Maybe it was just an observation place like Baty Butte?  I know Baty Butte had a phone line up to it but no structure.

The Rho ridge segment is a great find I figured it would be there in the old growth off Collowash. A couple of months ago I located a piece at the other end off the 46 road. Just need to connect them up. There should be something below the road. Attached is the GPS track of the segment I located. 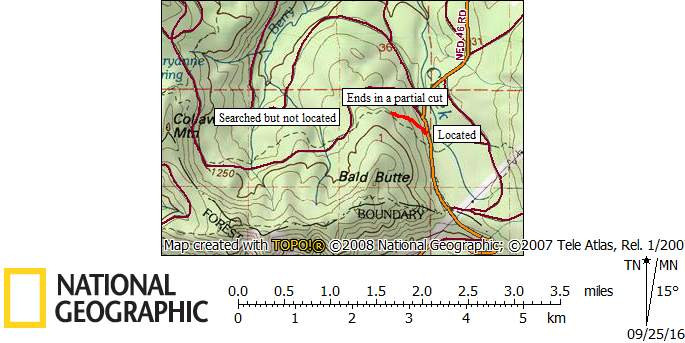 Good to know that there's another piece of the Rho Ridge trail still intact.  There's been so much logging in that area that it might be hard to find the rest of it.  I'll do some more looking around at the Collawash Mtn end to see how much farther I can follow it south and east.

I did a little looking at a few sites and there doesnt' appear to be any info on a lookout structure on Collawash Mtn.  Maybe it was just an observation place like Baty Butte?  I know Baty Butte had a phone line up to it but no structure.

As far I know there was never a lookout on Collawash Mountain. I have an undated trail log from the FS which mentions Lookouts on Mt. Lowe and Hawk, but not on Collawash Mountain which is the next entry. I'm guessing this log dates from the 50's or earlier. It calls what we now call Rhododendron Ridge Trail the Skyline Trail. At that time both the Skyline and the Pacific Crest Trails followed Rhododendron Ridge for better than 10 miles. 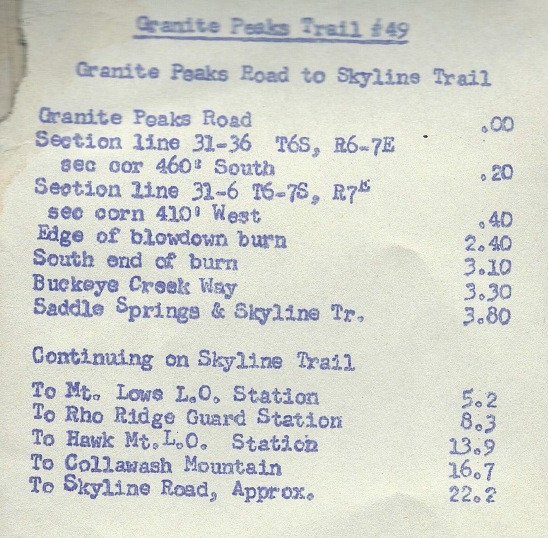 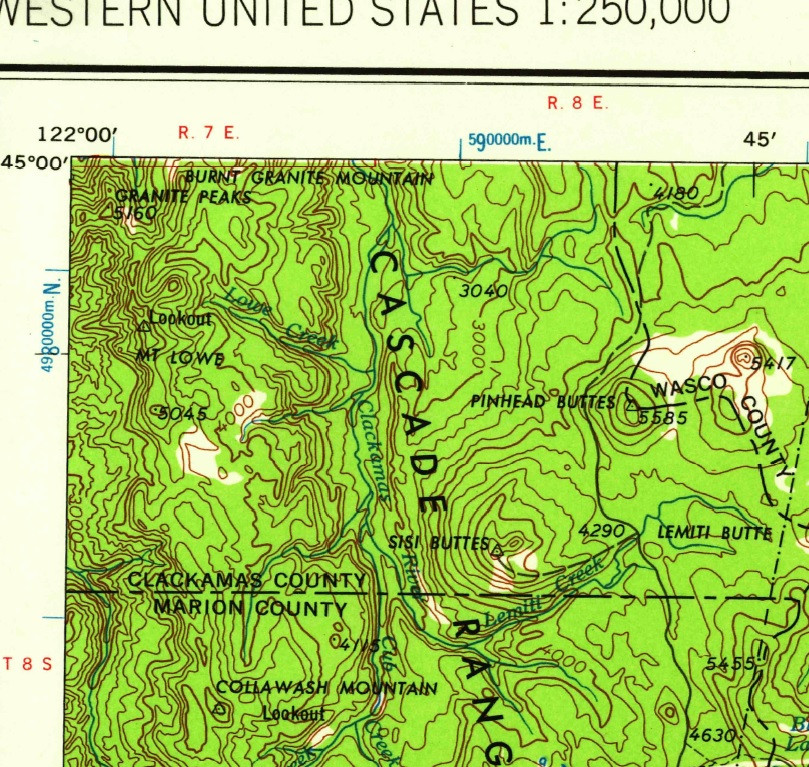 Looks like you are right - that lookout is a mislabeled Hawk Mountain. Thanks for finding this - I will look for the same in my map collection.

I'm going to do Mount Lowe and Hawk on Tuesday.

The trail and phone line to the top of Collawash Mtn had a purpose, presumably serving a temporary fire watch site on the exposed ridge.  If so, I wonder what kind of setup might have existed up there.  The photo below shows an example of an outdoor alidade stand with a phone nearby.  Maybe there was something like that. 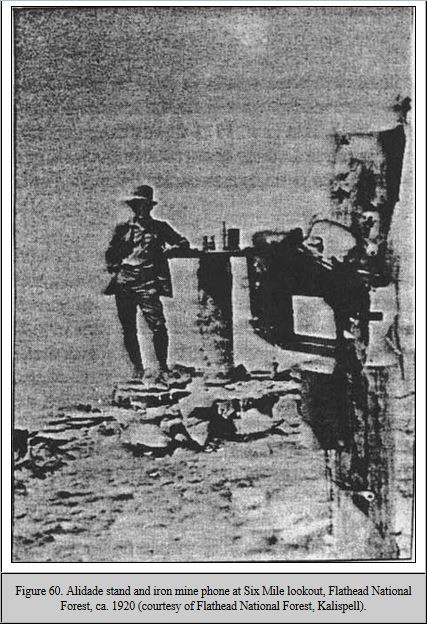 In the post Historical Items of interest | Old Lookout Photos on the sidebar there is a link to Collowash Mountain, which shows it is most likely a seasonal lookout site, like Baty Butte, which is also listed. I will see if I can find the old Firemens Maps for Collowash Mountain. I have one with Baty Butte shown with the label L O. Nearby peaks that had a Fire Tower were marked in addition with a red stamp of a L in a circle.
Collowash Lookout Panoramas