See Thunder Mountain Trail 543 for one map showing the relationship of this trail to 542 and 543.

Officially only a mile long trail skirting Baty Butte this trail actually continues some six miles along the Molalla-Clackamas divide running south beyond the powerlines and then down to Joyce Lake.  Sometimes it is referred to as the Boundary Trail. There are two access points north: Lost Creek Meadows and the northmost point on the 7010-160 spur.   As you drive up the 160 spur watch for Baty Butte — a distinctive white “beard” on it’s south face* — and as you turn away from it there will be a long abandoned deck of logs on the right.  The trail is just over this deck.  There is no real parking spot except for squeezing in off the road. This is a segment of the old South Fork Trail, formerly a first class route from Estacada to Bagby Hot Springs.  The Lost Creek Meadows trailhead is on the right in a level stretch of road shortly after the end of the climb up the hill.  There is room for a few rigs to park on the left.  Two south access points are the powerlines (a wild flower paradise) at the crest of the ridge and at Joyce Lake left at the entrance to the lake (not at the lake!) at Joyce Lake Road (BLM).  A powerline access road leads up to the crest of the ridge.  Trail runs both directions along the ridge from the clearing.

Trail is maintained by users.  The north three miles of the trail are better maintained than the south end. There are no signs.  Trail survives by virtue of its scenery, wild flowers, and views.  There is usually a breeze. An historic trail well worth investigation. Frequented by hunters in the Fall.  Biologists have some interest in the flora.  The route is not particularly strenuous.

Two bad spots prevent smooth passage.  Climbing out of the lake the trail ends at BLM clearcut just before a saddle.  Scamper up the scree slope here and regain the trail at the north shoulder of the saddle where the cutting ended.  You will now be heading north.

Another logged over stretch, a Forest Service partial cut, is about a quarter mile north of the powerlines.  Continue at the same elevation to find the continuation of the trail north at the other side of the harvested area.  Volunteers improve this stretch a little each year.  Kind of tough stretch. Nice berries in August. There are flags tied.

Trail shows on the older topo maps.  Has been deleted from the new edition.

The switchbacks into Lost Creek are impassable but do deliver you into the midst of an incredible bounty of salmon berries.

Minimal water, if any, along the route.  A dribbly spring is located about a half mile north of the powerlines.  Another one is at the switchbacks about a mile and a half north of the powerlines in a berry patch.  These switchbacks can be grown over with salmon berry thicket.  If you loose the trail, head up to the saddle.  The trail continues north and towards the eastside of the next highpoint.

This is a great trail with no official protection at this time. The south end needs some friends to work on it. 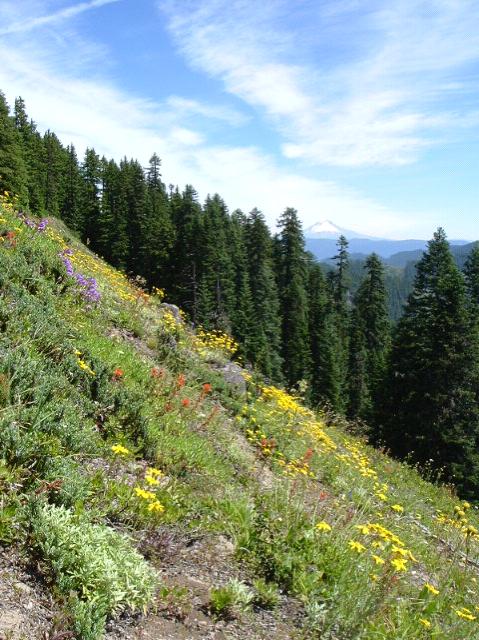 AWESOME WILDFLOWER DISPLAY ON THE DIVIDE

*Baty Butte was named after a local, Andrew Jackson Baty, who spent a lot of time hunting up here around 1900.  It had been known as Whitespot.

Additional details from “Oregon Geographic Names” – Andrew Jackson Baty was a farmer who lived on Dickey Prairie about five miles south of Molalla.  He was a pioneer settler in this locality and spent much of his time hunting in the Cascade Range.  This mountain was named for him, probably by the US Geological Survey party which prepared the maps accompanying Professional Paper Number 9, “Forest Conditions in the Cascade Range Forest Reserve”, Washington, 1903.