Note: The lower parts of this trail suffered significant damage from the Riverside fire.  This trail is currently inaccessible due to Pipeline road being closed.

A good year-round opportunity for fun.  Easy  access only about a mile off the pavement. After passing STRAIGHT  through Three Lynx, climb to the saddle.  The trail is on your  left.  If you drive downhill at all you have gone too far.

There is usually year round access to  the trailhead.  As the trail leads to the high country you  will encounter snow at some point during the Winter and early Spring.  An effort is made to keep this trail clear of fallen trees and debris  to the snow during the Winter.

This is a great way to access the high country by  foot rather than miles and miles of gravel road driving.  The  trail also clears of snow weeks before the 4635 road.

According to C.W. Elliot, civil engineer of Portland, Cripple Creek was named for a surveyor who cut his foot with an ax in the vicinity in 18971

Three Lynx has an interesting story on how it was named. Old maps show the creek called Three Links, and there is a legend in eastern Clackamas County to the effect that this name was the result of loss, by a surveyor, of three links out of a surveying chain. Ernest P. Rands and William C. Elliott of Portland, for many years civil engineers in Oregon, said there was not truth in the three links story. They were in the neighborhood of the stream at the time it was named. They are authority for the statement that one of the Austin family, early settlers nearby, named the stream Three Lynx creek because he saw three bobcats on its banks.1 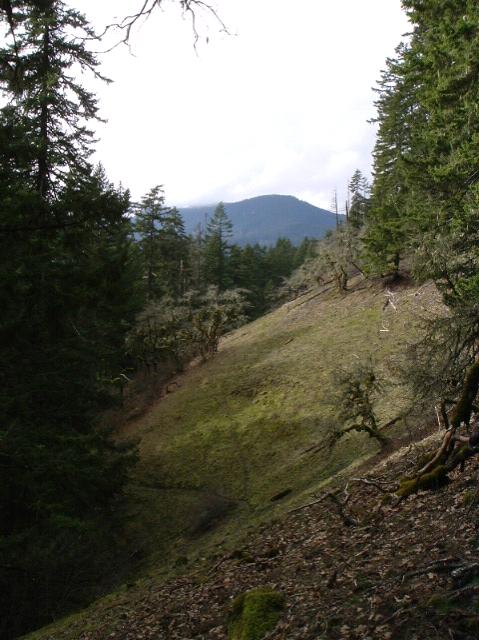 WHALEHEAD RISING IN THE DISTANCE

It is possible but not recommended to start the hike at Hwy 224 just across the Sandstone Bridge (the fourth green steel bridge crossed from Estacada).  Park on the right at  the east end of the bridge.  Cross the highway and follow the closed off road to a camping area.  Go left across the creek and
follow the old road up the bank about 50 feet.  A trail departs on the right.  Follow this trail up to an old railroad grade.  Turn right and follow the grade about half a mile passing an alder bog on the right.  Just past the bog as the grade tends right look for a trail going up a shallow draw to the left.  Climb up to the improved Pipeline Road and go over the aqueduct (10 foot diameter iron pipe).  Cripple Creek Trailhead is on the right. 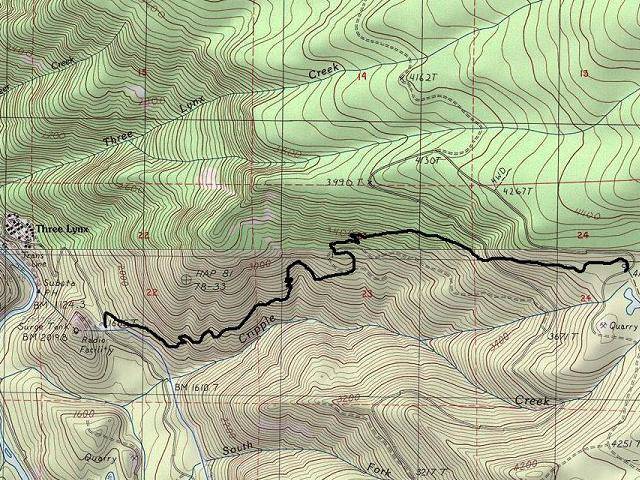