The Oregon Skyline Trail was the precursor of the Pacific Crest Trail in our District. The original trail led from Mount Hood to Crater Lake. Most of the original 1920 route in our District was built in 1909. Parts of the old trail remain as artifact. It is a very clever, direct north-south route which leads from water to water and meadow to meadow. While logging has damaged much of it, significant stretches remain. Parts of it are later referred to as Sheep Runway. There were active grazing allotments in the area. 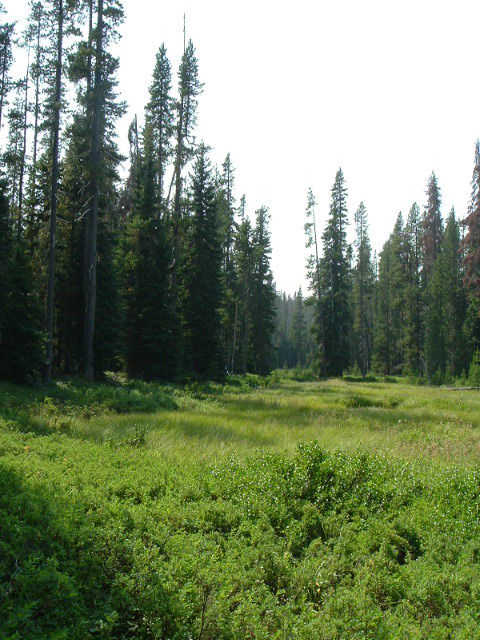 FEED AND WATER ON THE OLD SKYLINE TRAIL

The first route was incrementally replaced by the Skyline Road. The original trail remained in use and other trail alternatives were created. There was a serious shortage of water and browse for the horses and mules. Feed was sold at Guard Stations along the way. The trail was a heavily used grazing access for flocks of sheep. Recreation planners believed that traveling to the west offered better scenery and water access. The last reroute was along Rhododendron Ridge. There was some dispute as to whether people would want to drop down to the Clackamas and then climb out. But the scenery was superior. This didn’t last long. The tone of trail management changed as road building and logging became high priority. In the 1950s the trail was moved into the dry east country to eliminate conflicts — to get it “out of the way.” Also, the creation of Timothy Lake, a resevoir, by PGE required altering the route in 1958.

Fragments of the old Skyline routes can be enjoyed today from Olallie Meadows to Olallie Lake, from Si Lake to Lower Lake, and from Burnt Granite to Cachebox Meadows. Unmaintained fragments can be found just south of Squirrel quarry, from Wolf Springs to near Si Lake, from Olallie Meadows to Lemiti and Slow Creeks, between the Pinheads north to the Wamchuck (Warm Springs) River. The Gibson Lake Trail 708 is a former segment of the Skyline Trail. There are doubtless other remaining segments around Fire Spring, Rock Spring, Peavine Spring, Campbell Creek, and Stone Creek.

An interesting historical tidbit – Lemiti is the Chinook jargon word for mountain, and is a corruption of the French la montagne. The word seems to have been applied to a nearby point in the Cascade Range, Lemiti Mountain, and from it transferred to the meadow and creek by someone who did not understand its significance. The name does not now seem to be used for the mountain.1

This is a huge subject with much history largely unknown and untold. We will add information as we come by it. If anyone has any knowledge of the Skyline Trail in the Clackamas District they would like to share please do so. Eventually, we will scan and post some interesting historic material. Meanwhile, it’s fun to scout the old trail and experience history. 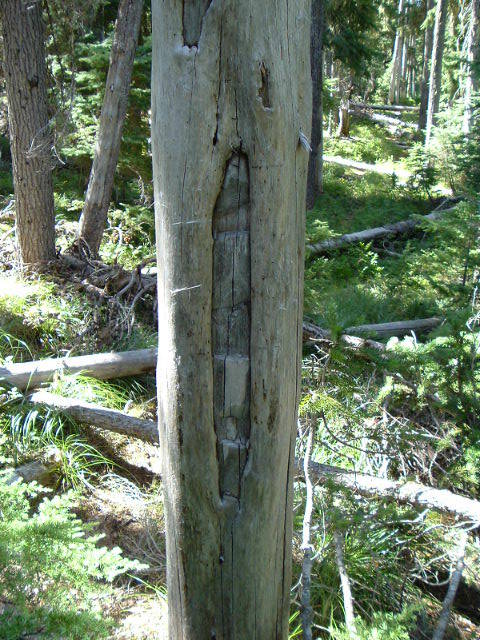 OLD BLAZE ON THE SKYLINE TRAIL

The most difficult part about the Skyline Trail history in our District is keeping up with all the alternate routes. The current Pacific Crest Trail is the fifth routing. The original 1920 route is the most significant in as much as it’s general location lay close by routes in use long before the creation of the Forest Service. It walks like a pre-eminently purpose driven user’s trail. Most of the historic route escaped inclusion in the Warm Springs Reservation, private property.

Map Scans of the Skyline Trail over the years